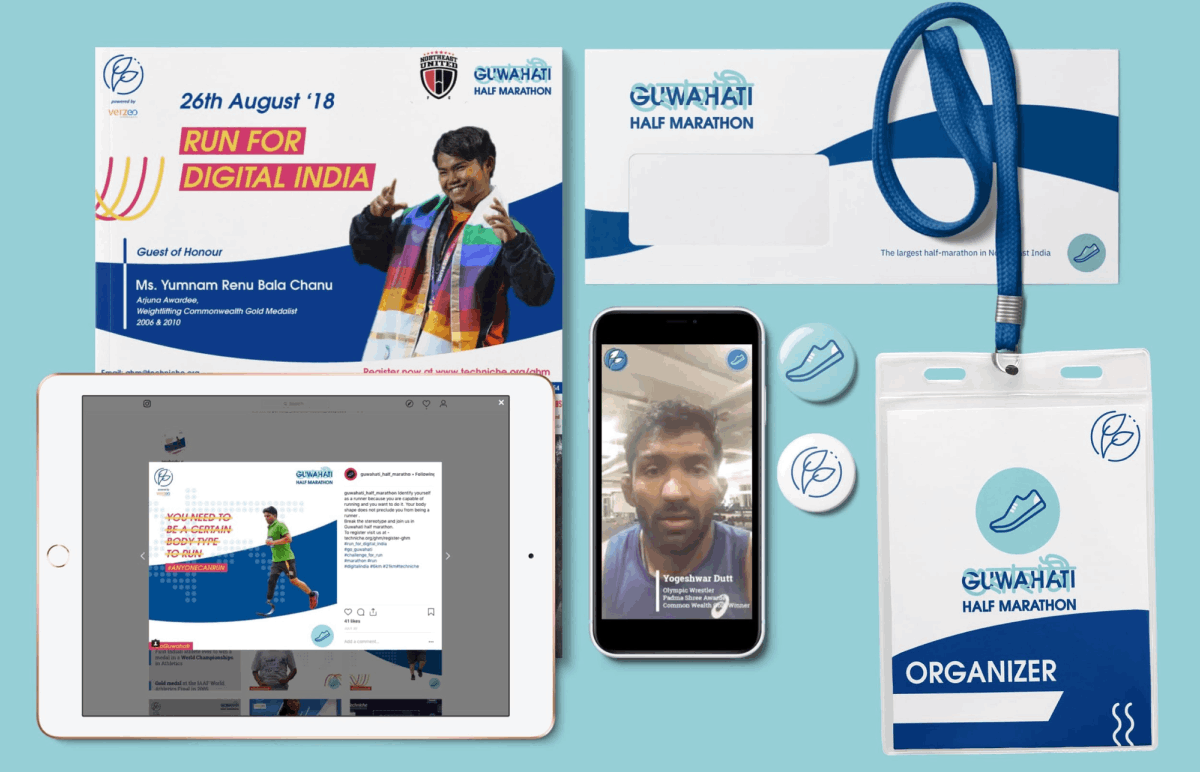 The Guwahati Half Marathon is the largest half-marathon in North-East India, with a participation of upto 5000 people - all completely organised by students.
‍
This redesign focuses on creating a visual language which works well in two languages — English and Assamese (native language of North-East) — and incorporates the soul of a marathon along with the location of Guwahati City. 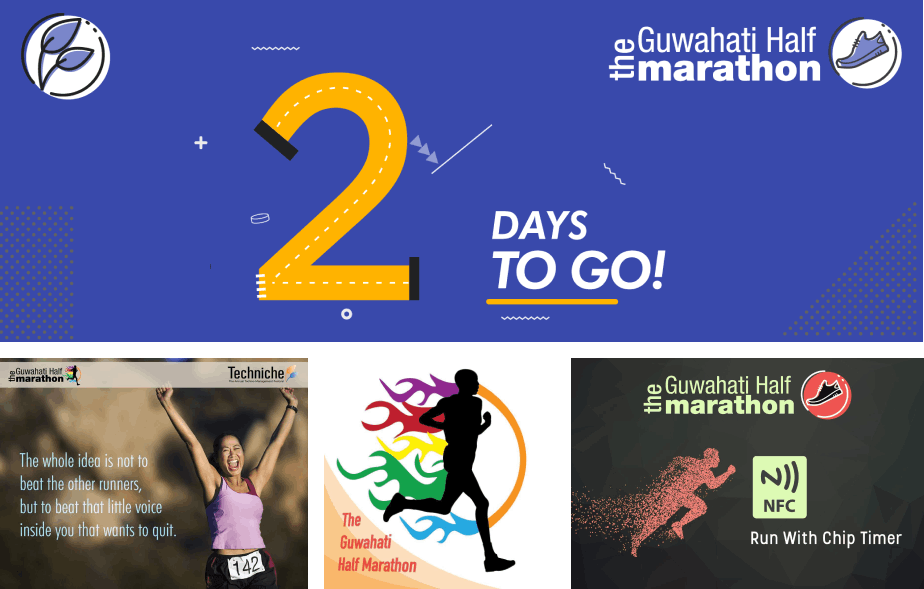 Tap on the images to see them in detail

Listening to the People

We researched to find out what motivates people to run in marathons so that we can make sure our visual language reflects and evokes those emotions in the people who come across it anywhere- on a billboard or on social media.

We also found out the pain points our target audience has by going going through our reviews on the Facebook page, reaching out to the people who had issues with any aspect of the conduction of the marathon and trying to see if the visual language and information design of the marathon could improve it in anyway.

Alienation for Newbies
A lot of people felt that the Marathon was targeted towards professional runners only. A result of this, a lot of fitness enthusiasts never registered

Lack of Awareness
Despite our best attempts in Marketing the marathon, there were people who missed out simply because they hadn’t heard about it in time

Understanding
Each branding process starts with an understanding of a the brand's uniqueness and value.

Following the insights we got from our research. I brainstormed with my team and broke down GHM into it’s core components — which we wanted to show in our visual language
Setting Goals
Every year, participation from the people in the city is one metric we aim to maximise.
‍
Right from the get go, I wanted to incorporate parts of the city and the culture into the visual language for GHM. So that Guwahati Half Marathon felt like their very own marathon 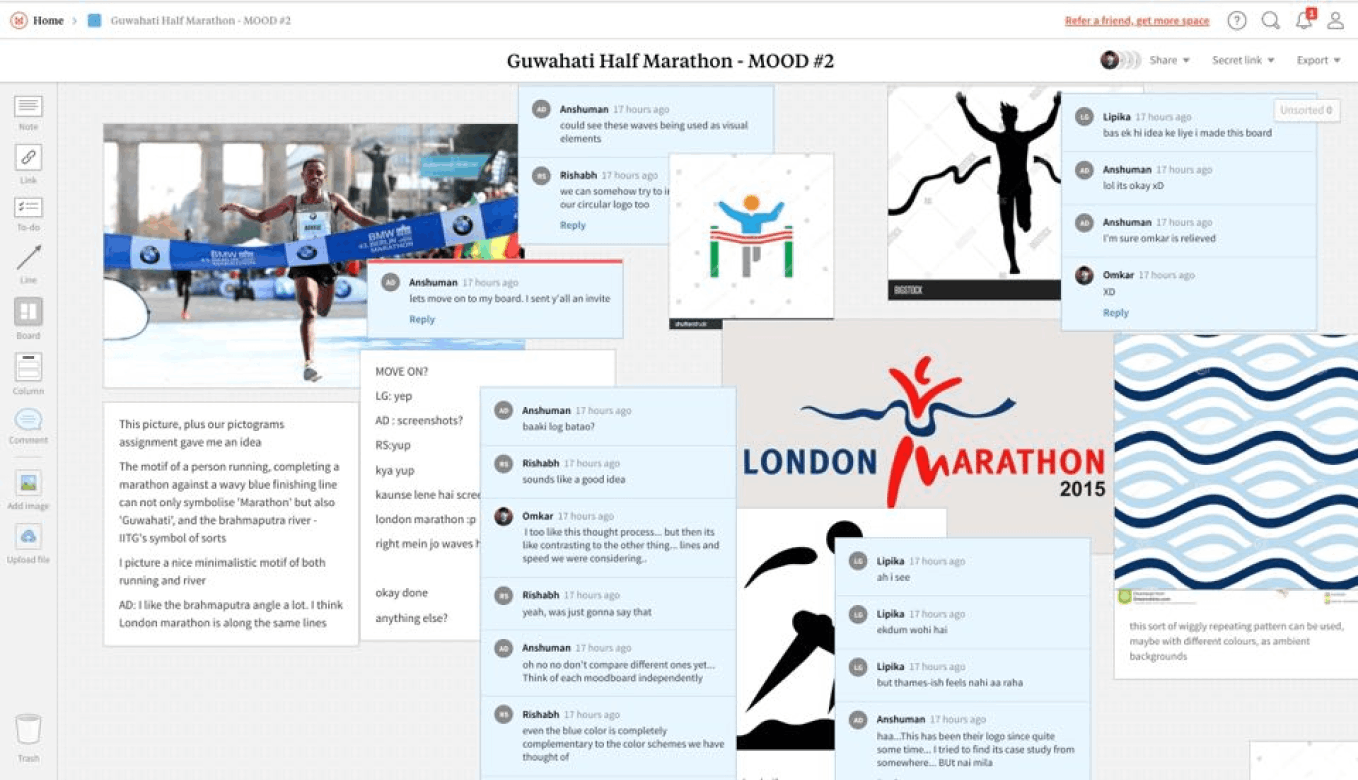 One of the many directions we came up with
Downselecting
Next, we spent time exploring these few directions. Realising a few deliverables to help us make our final decision. 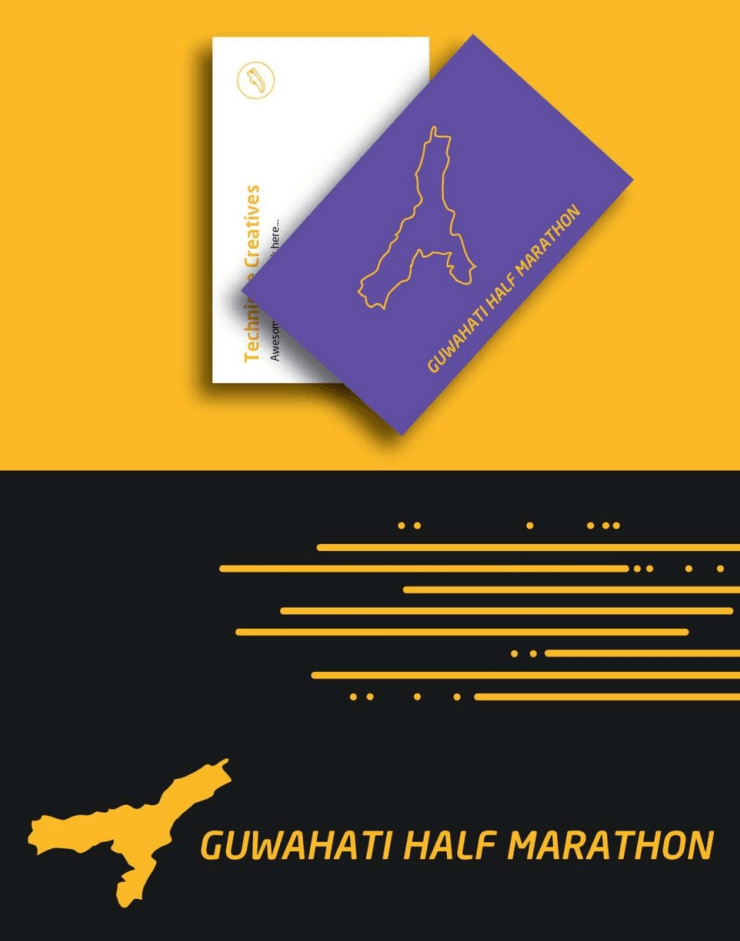 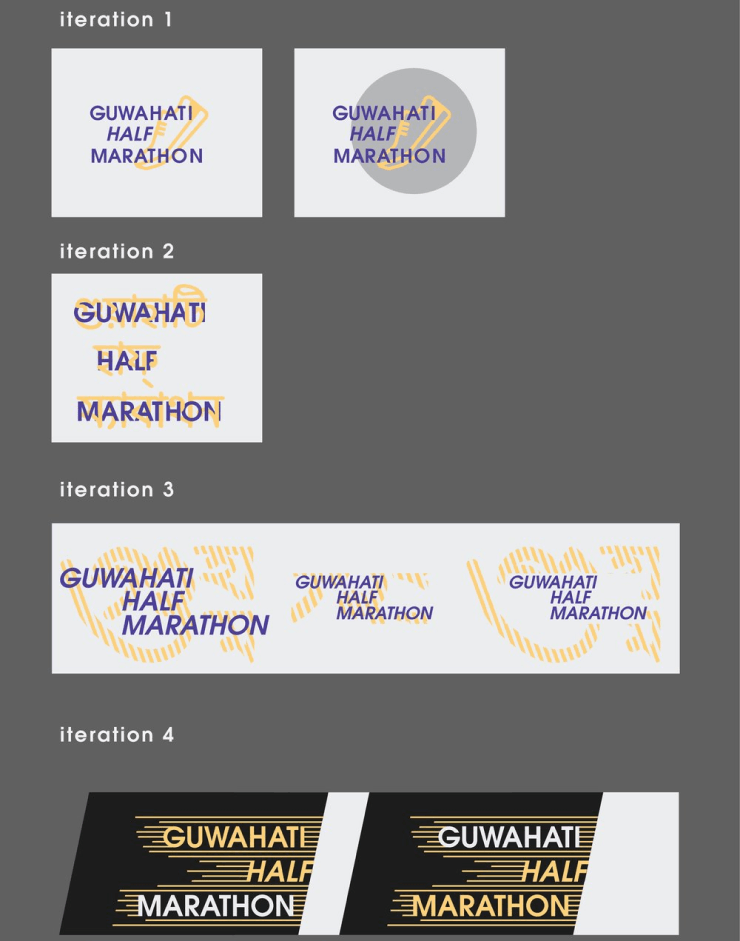 Some of our early iterations
We finalized on the interweaving Assamese and English text logo.

This iteration had the most amount of connect with our target audience. Not only that, the choice of the simple stroke-like Assamese font evoked the same feeling a race track's icon would and was consistent with our logo for the event. 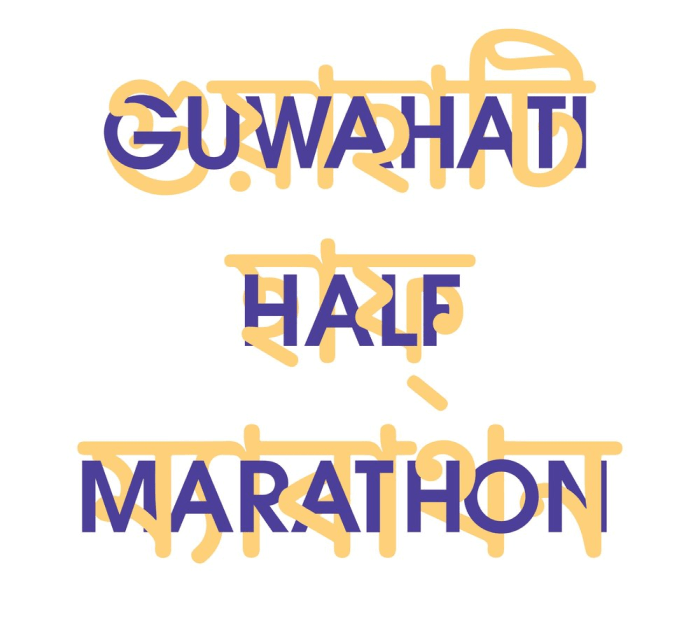 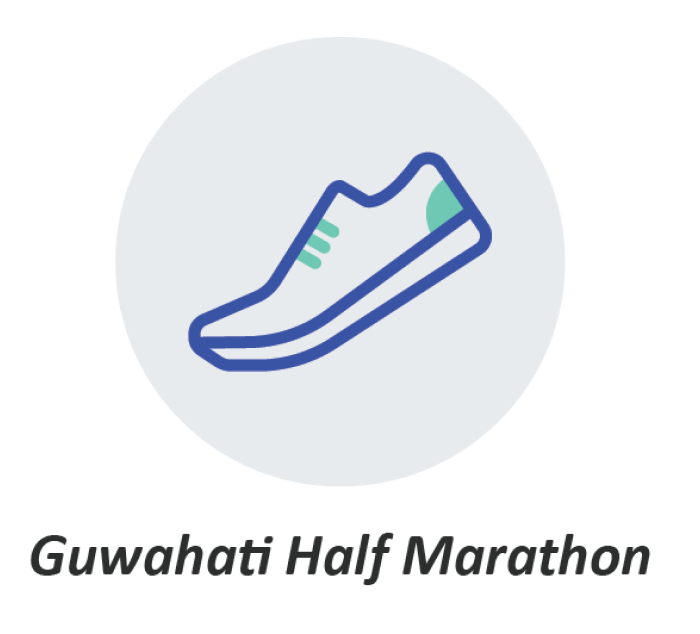 The wordmark iteration we decided upon and the existing logo on the right
What Worked
Interweaving the elements gave the feel that Assamese and English counterparts weren't two halves of the same marathon but connected together at its core and actually the same thing.

Symbolizing that GHM wasn’t some foreign event or just an initiative by some students. It was something that was native to Assam itself and everyone should run for it.

The usage of both languages in the wordmark also helped us market the event better and reach a larger crowd — this was possible because of bi-lingual branding deliverables.

Playing around with the composition of the logo
Refining the chosen solution
‍Although it was designed to make sure legibility wasn’t compromised, we realised people would need to linger on the existing wordmark for awhile to register the meaning behind it.

So we decided to keep the interweaving limited to the most essential part of the north-east culture among the 3 words. That word being, ‘Guwahati’.

We decided to give the wordmark personality of the digital theme through the use of colour.
We realised that we won’t be able to portray much of our theme (Run for Digital India) while an ancient typeface was also a part of the wordmark, contrasting against the modern theme.

The style guide for the brand
Given that the marathon takes place in the morning hours of a day in August, we wanted to have a colour palette with summer colours which also go with our theme of running for a Digital India.

ITC Avant Garde Gothic paired best with the simple stroke-like Assamese font we chose to go with. The Demi and Demi Oblique  variations were chosen to communicate the emotion of speed and being bold wherever required.

The final logo along with wordmark
Branding Collaterals
We marketed the event through social media, posters in colleges and billboards in the city.
‍
We had quotes from famous runners, tips and a social campaign about removing the stereotypes associated with running, to reinforce the fact that marathons aren’t for professional runners only. 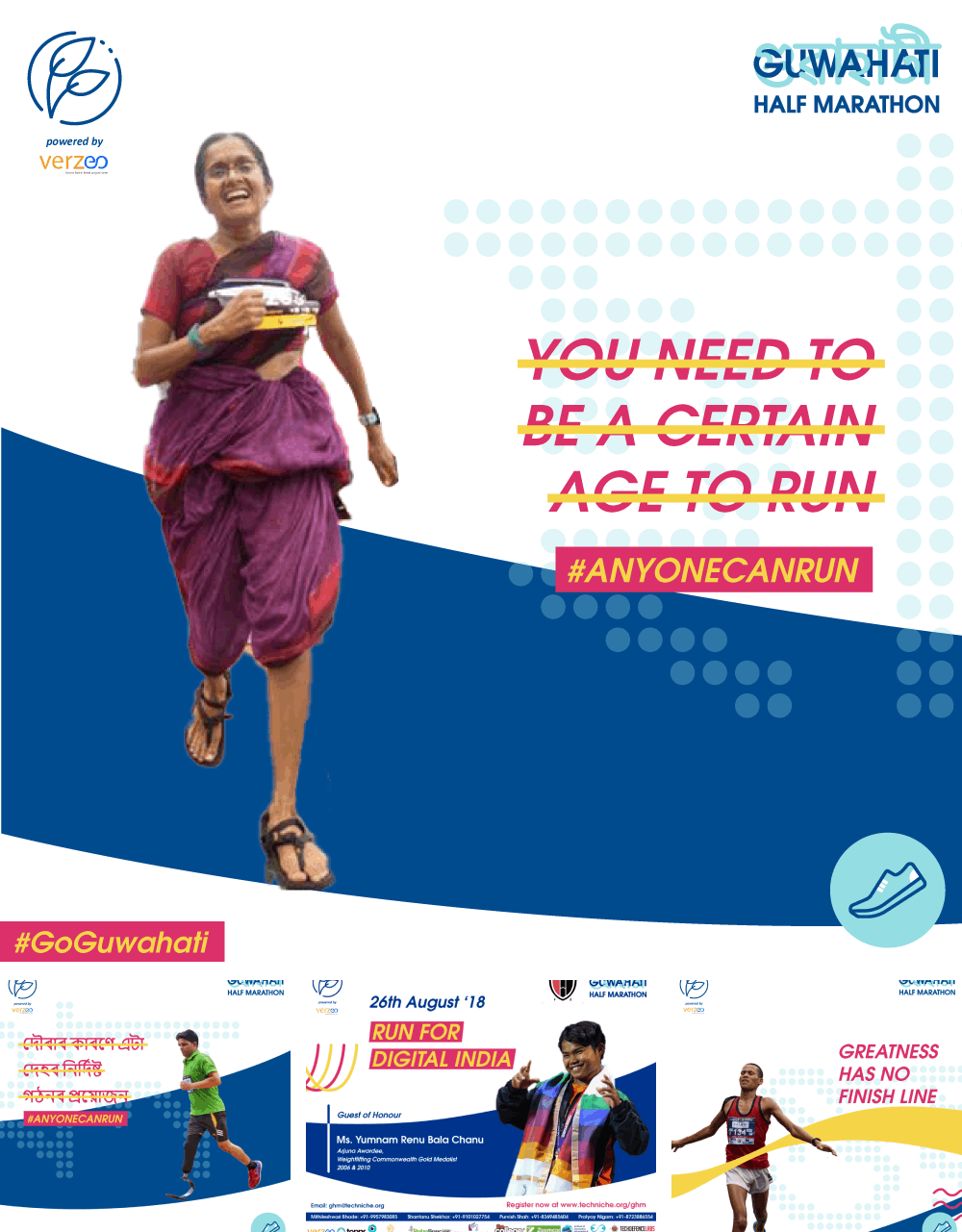 Tap on the images to see the others 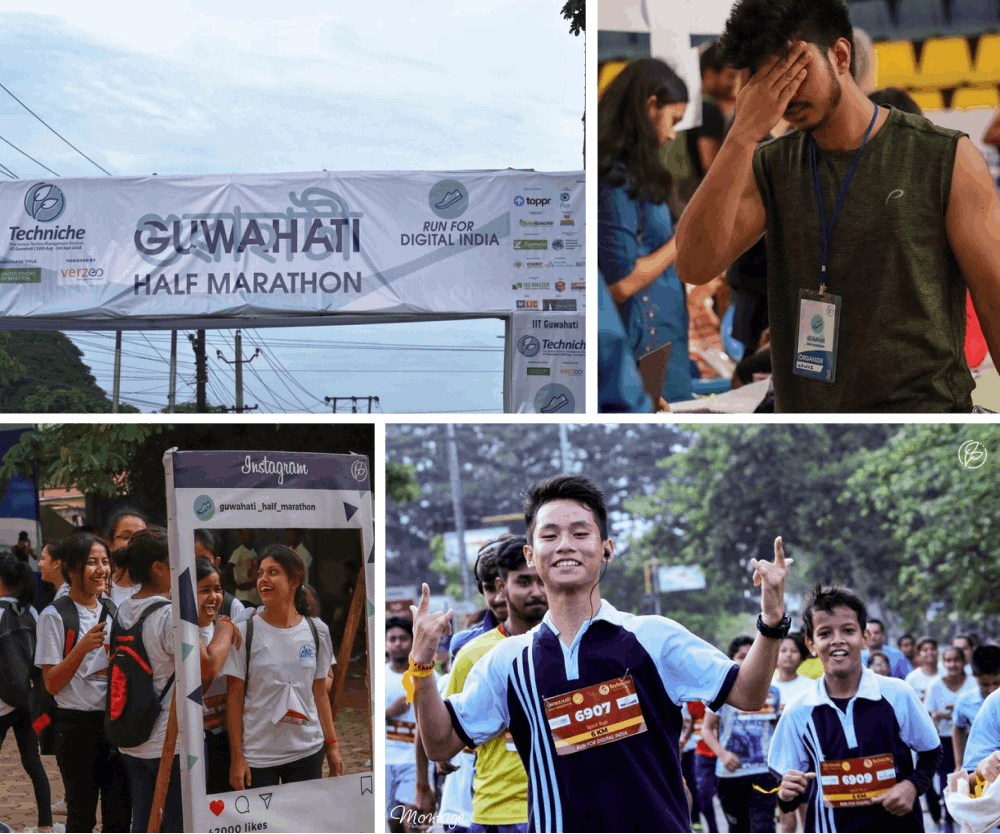 Tap on the images to see the others

As the Project lead, given the large scale at which people would be affected by this. It was very challenging but enriching learning experience in making sure I factored in all stakeholders and areas which might be affected by my design decisions.

This rebrand pushed me to create a whole visual language from start to end: logo, design system and branding/marketing collaterals. In the process, I also learnt a lot in managing a design team remotely.
Branding is a hobby close to my heart, say hi to talk more about it!
click to compose email
click to copy email id